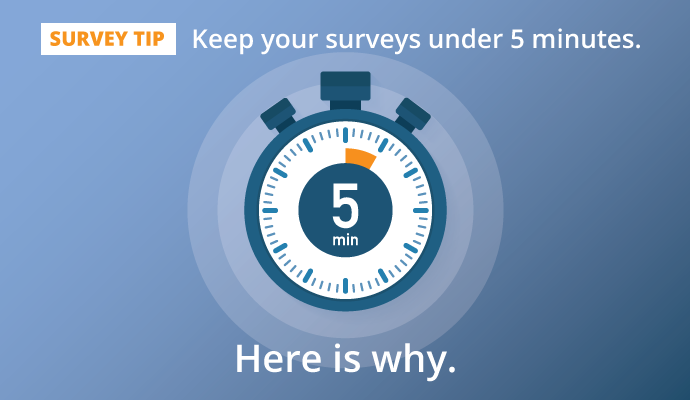 Making the Most of the 5-Minute Survey Window

When you’re collecting survey data, time is of the essence. Participants can give you high-quality data for only about five minutes. After that, they tend to lose focus and interest—and the data quality plummets. To maximize research effectiveness, you need to collect the most data possible from each participant in the shortest amount of time. Paring down a lengthy list of questions can be challenging, but the effort pays off in a better-quality data set.

But when you’re limited to explicit-only questions and responses, you’re unlikely to gather sufficient data in five minutes. It might appear to happen sometimes, but in such cases your participants are probably rushing through the survey.

To maximize information density, use a tool that can collect implicit responses by capturing behavioral data in addition to explicit answers. In the past, collecting implicit data was complicated, expensive, and subjective, dependent on live observations of participants in a lab setting. But today, there are affordable, reliable digital engagement tools that can capture both explicit and implicit responses at the same time.

New behavior-enabled surveys offer a much better alternative to traditional explicit-response-only tools. They yield more information density than traditional survey tools, allowing you make the best use of the five-minute time slot each participant can spend with you.

BES tools use a digital engagement model that ensures high-quality data. For example, using Survature’s AnswerCloud™, you can condense a 100-question survey into 5 answer cloud questions with 20 items in each cloud. Each cloud takes respondents about 45 seconds to complete, keeping the final survey under the 5-minute threshold—and the tool collects implicit behavioral data around respondents’ decision-making, deliberation time, and more.

When you use BES tools, you create a natural, comfortable space to collect explicit and implicit data simultaneously. And because the technology is affordable and practical compared to collecting implicit survey data in a laboratory, it makes behavioral data an accessible new tool for researchers.

Jessica Leigh Brown is a writer focused on emerging technologies in education and business. As a freelance journalist, her work has appeared in more than a dozen trade and consumer magazines, and she enjoys working with technology companies to create content such as white papers and case studies.

Do you have a big question that needs answering?

Contact us and find out how Survature can show you what matters to customers.